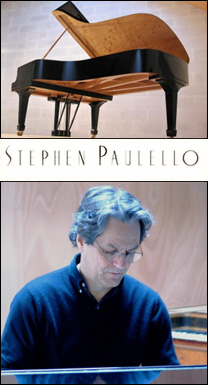 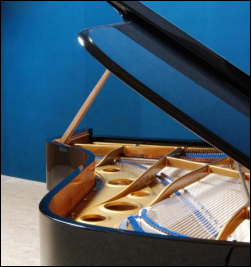 Stephen Paulello is a very sensitive and talented concert pianist.

He won international prizes then led an artistic career, becoming interested in the construction of the instrument he played in studying all its various aspects: metallurgical, acoustical, strength of materials …

To begin with he designed two models of upright pianos, then completed his first concert grand piano in 1990. This prototype is universally acclaimed as an example of a precocious but perfect mastery of piano construction.


But Stephen Paulello wants to go further. The piano in its traditional form does not satisfy his demands as a pianist. He dreams of more complex and expressive sonorities which guide his inventive intuitions and motivate him to question established dogmas.

For more than 20 years now, Stephen Paulello has studied systematically all the components of the piano, challenged generally accepted ideas and made remarkable proposals. His aim is not to impose a reputedly perfect piano, nor to replace a neutral and polyvalent standard by another; his desire is to convince musicians that they should explore the

potential of different instruments, which respond to their personal imagination and carry them to the height of musical expressiveness.

Stephen Paulello’s pianos are constructed to order in his workshop-laboratory in France, between the Champagne and Bourgogne regions.


A NEW ERAFOR THE PIANO,
A WIDER HIRIZON FOR COMPOSERS AND PERFORMERS

For more than a century, technical and acoustical choices by manufacturers have converged towards a unique conception of the piano.

In the years 1880, the instrument was almost perfected; complaints from pianists and composers became less insistent and growing enthusiasm for the piano led to increased demand. It was necessary to put a brake on the exuberant inventiveness of the XIXth century craftsmen and move on to rational,

industrial production. Piano makers conformed progressively to the technologies of the most enterprising and well-established manufacturers of the era. Inevitably, the sonority of pianos lost its diversity to a common esthetic.

Since then, the trend of standardization has been validated by the explosion of production in Asia, where the base model is conscientiously reproduced.

It is therefore normal to think that all pianos are alike because the instrument has reached its final form and is a perfectly finished product.

Stephen Paulello does not agree with this point of view. The piano represents for him a vast subject for reflection and a whole world still to be explored. He is working in two directions:

the confusion at the break, the frequently poor quality in the medium

When searching for musicality and charm, there is a great temptation to look to the past. Stephen Paulello has examined pianos of days gone by, with a preference for those made at the turn of 19th and 20th centuries. In dismantling, restoring, modifying them, he revives the spirit of inventiveness which created them. Certain concepts of construction widely applied at the time, such as parallelism of the strings or the use of barless frames, were in his opinion abandoned before their full capacity was understood… Rather than contenting himself with a cult of the past, Stephen Paulello takes up the history of piano-making there where it came to a halt.

Many of the ancestral procedures still used today are obsolete. New materials, combined with new technologies, on condition that they are correctly used without harming the sonority, can contribute to the piano’s reliability. However, that does not mean that it is necessary to move towards numerical instruments. For the composer, the synthesizer can be a remarkable tool for creating sounds, but when used to replace the piano it remains, despite all efforts, a mediocre substitute. Nevertheless, it represents a challenge to the original instrument which is therefore forced to correct its technical weaknesses while refining the natural acoustic so that the artistic and emotional scope remains incomparably superior.

It is in this spirit that Stephen Paulello seeks to give a definite and refined character to his instruments with an enveloping radiance conducive to the musical journey. The pianist has at his disposal an infinite palette of colors and feels that the instrument understands the slightest figment of his imagination. Such a piano is not a tool but a source of inspiration. Stephen Paulello also makes a gesture towards composers and improvisers in proposing an extended keyboard in the bass and treble and in making it

much easier to play directly on the strings: parallel strings, elimination of frame bars, nickel-plated strings.

Avant-garde in research and inventiveness, rare in their level of accomplishment, prodigious in their musical intensity, Stephen Paulello pianos extol music and musicians.

Instead of bridge pins ・ Longer and purer sound

For the first time ever in piano manufacturing ,

the soundboard is freed from any mechanical constraint and can finally fulfill its acoustic potential ・ Enrichment of the palette of colors・ power ・ subtlety of the nuances.

Stephen Paulello keeps these strings exclusively for his own piano production.

・ More depth, power and legibility of the bass register. 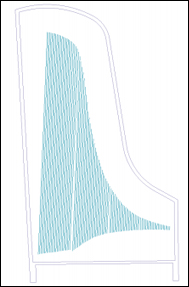 A concept with undeniable technical, acoustic and musical advantages. Above all, it is the

characteristic sonority of parallel stringings which influenced our choice. The transparency, stability and airiness in the sound give the piano a three dimensional aspect and a natural spatializing of the different registers. Parallelism also eliminates the heaviness and blurring inherent to the medium bass.

A keyboard with 102 notes: eight octaves and a fourth, from C to F:

The evolution in the keyboard’s range is a result of the progress in the string’s metallurgy.

Following the string’s mechanical characteristics, the keyboard has developed little by little from four octaves (with Cristofori in 1700) to eight octaves (with Henri Pape in 1842), to return

Taking out the bars of the frame eliminates the weaknesses usually perceptible in the notes situated near each bar.

Moreover, the nickel-plating of the wires protects them from the oxidization normally caused by contact with the hand when playing directly on the strings. 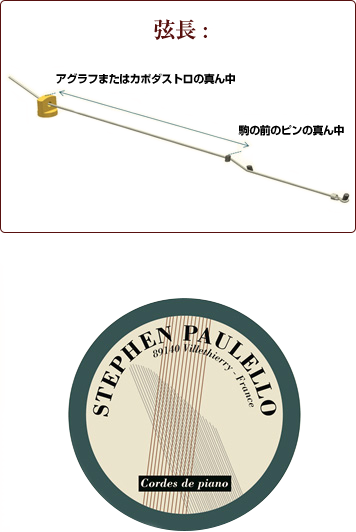